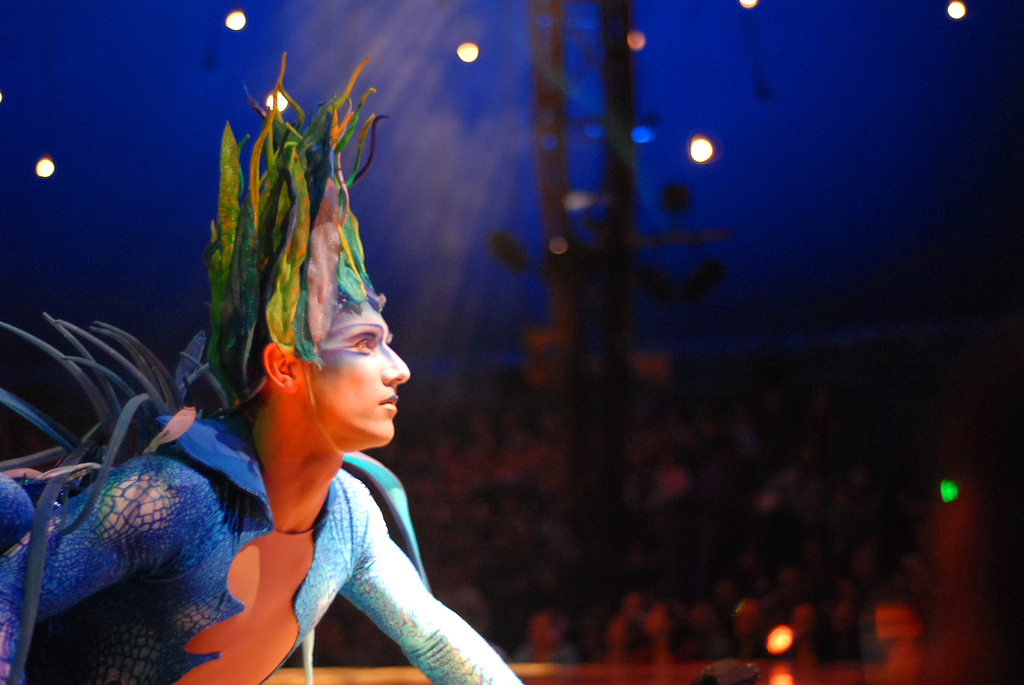 20 Years Under the Sun

is the authorized history of the largest theatrical producer in the world and its founder, Guy Laliberte. Written by Tony Babinsky, the book features stunning color photographs and explains the rise from a humble performing group to a successful multinational.

In hindsight, it is easier to answer questions like how that happened, and why. But, in one way or another, it all begins with a dream.

would be Quebec’s first-ever homegrown circus, and it would provide Laliberté and his friends with a way to travel, have fun, and make audiences happy. Twenty years later, that simple plan has turned into an international entertainment success story.

was born of the wild aspirations of a handful of individuals hungry for light, freedom, and the gifts of the imagination.

As Pablo Picasso stated in his diary (A Life of Picasso)

<<Inspiration does it exist, but it must find you working>>, Laliberté came with the name Cirque Du Soleil

while he contemplated his projects on a beach in Hawaii.

Hawaii was always a creative place for me, a place to think. During the whole échssiers/fête foraine period, I was really attracted to the sun. I spent a lot of time on the beach. When I first thought about forming a circus I was watching the sun set on a beach in hawaii.

. In the Book of Symbols, there is a quote from Lao Tzu which says <<He who walks on stilts can be compared to the White Crane of China, and no mountain or river can stop him from attaining the Island of the Immortals>>. One of the things that really affected Cirque Du Soleil

was the 1976 summer olimpic games in Montreal. Subliminally, it introduced Quebec to the notion of high performance.

was making artistic advances in 1985, it also met head-on with near-financial ruin. This crisis took all of the young company’s resources and powers of persuasion to overcome. By 1986, even if Laliberte was under crushing pressure, decided to move forward artistically.

I thought that performers should be dressed in a coordinated manner, from beginning to end, like at the opera, or in a musical.

There is a universal emotional achetype. We can cry in Belgium, or in China, or love in Belgium and in China for the same reasons. We wanted to create a language that was universal.

I knew what the creative process was all about. I got to choose people I had confidence in, and I gave them a clear path, without obstacles. Since I had confidence in them, I knew I was making a good decision. I climbed inside this yellow and blue tent, and it exploded out. It was as if it was bigger than anything the tent could contain. If they didn’t earn enough money at the gate, Cirque Du Soleil

could not afford to return home. Cirque Du Soleil

‘s story would end there.

Along the history of Cirque Du Soleil, the artists have been people eager to reinvent themselves. In The Spark, Lyn Heward, former President and COO of Cirque du Soleil’s Creative Content Division, tells how this is a life-and-death business.

The artists here must be able to perform the most incredible tricks in the world, yet never be in danger. That’s what forces us to be creative, to find new ways to do both. We are in a life-and-death business.

It is amazing how much we fear the unknown—even when the unknown carries with it the possibility of success. We are so determined to stick to our comfort zones that we learn to live with disappointment, as long as it’s familiar and safe. Our fears hold us back, make us fall short of our goals. Only by taking risks can we hope to accomplish the extraordinary.

You take one train or another, you can change your life’s direction.

We tell you to be yourself.

‘s growth throughout the 1990s was explosive. It went from a single show touring north America to four shows on tour simultaneously around the world. By 1990, it also had three successful resident shows running, two of which have breathed new life into las vegas entertainment.

The company grew from a small business into a small multinational.

While it was preparing for its launch of Saltimbanco in 1992, Cirque Du Soleil

toured Japan for the first time with a show combining acts from Lecirque réinventé and nouvelle expérience.

In the city, you will find us

neither fantasy nor reality,

neither man nor woman,

God nor Demon, song nor story.

We are no one, we are legion

We are saltimbanco! [/bluebox]

From Saltimbanco to mystère. It was about how life came to the planet. A story of the universe through all the mythologies. The next show ‘Alegría’ lasted so long because it is timeless.

Alegría , it’s what you say when you’re in pain. It means life goes on. Alegría, life goes on, alegría! Alegría pits the powerful against the powerless, the king against his fools, the old against the young.

Then, the faceless stranger rushing past, Quidam, speaking for the voiceless. Creating a masterpiece with 0 involved to learn how to work with water. La nouba and dralion brought fairy tales and cultures. Millions of people around the world have been delighted by the mentioned shows and the rest that followed. From 2000, Cirque Du Soleil was facing one tricky question:

[bluebox] How do you stay true to your roots while continuing to move in new directions?[/bluebox]

In The Spark, Lyn Heward talks about Guy Laliberte’s challenges:

He had been courageous enough to follow his dreams. Despite the obstacles in his path—money, time, and resources, he never let them hold him back. A lesson everyone could take to heart.

There are no limits; anything is possible. Believe that, live that way, and you can accomplish extraordinary things.

If you want to live fully, you have to TRUST.

probably ended up where it started: facing great chances and risks ahead.

Welcome to my site, the place where writers & publishers can find useful information, insights, resources & inspiration for writing, self-publishing & living a better ... END_OF_DOCUMENT_TOKEN_TO_BE_REPLACED